Over the past five weeks, the Apecoin (Ape) traders have been actively selling at a descending trendline and plunged the altcoin to a $3.13 low. The high demand pressure at this support bolstered a double bottom pattern recovery and breached the overhead trendline. However, intense supply pressure plunged the coin price below this trendline, indicating a fake breakout.

The APE price faces supply pressure near the $4.5 mark.
The coin price nosedive below 20 and 50 EMA
The intraday trading volume in Apecoin is $330.1 Million, indicating a 43.80% loss. 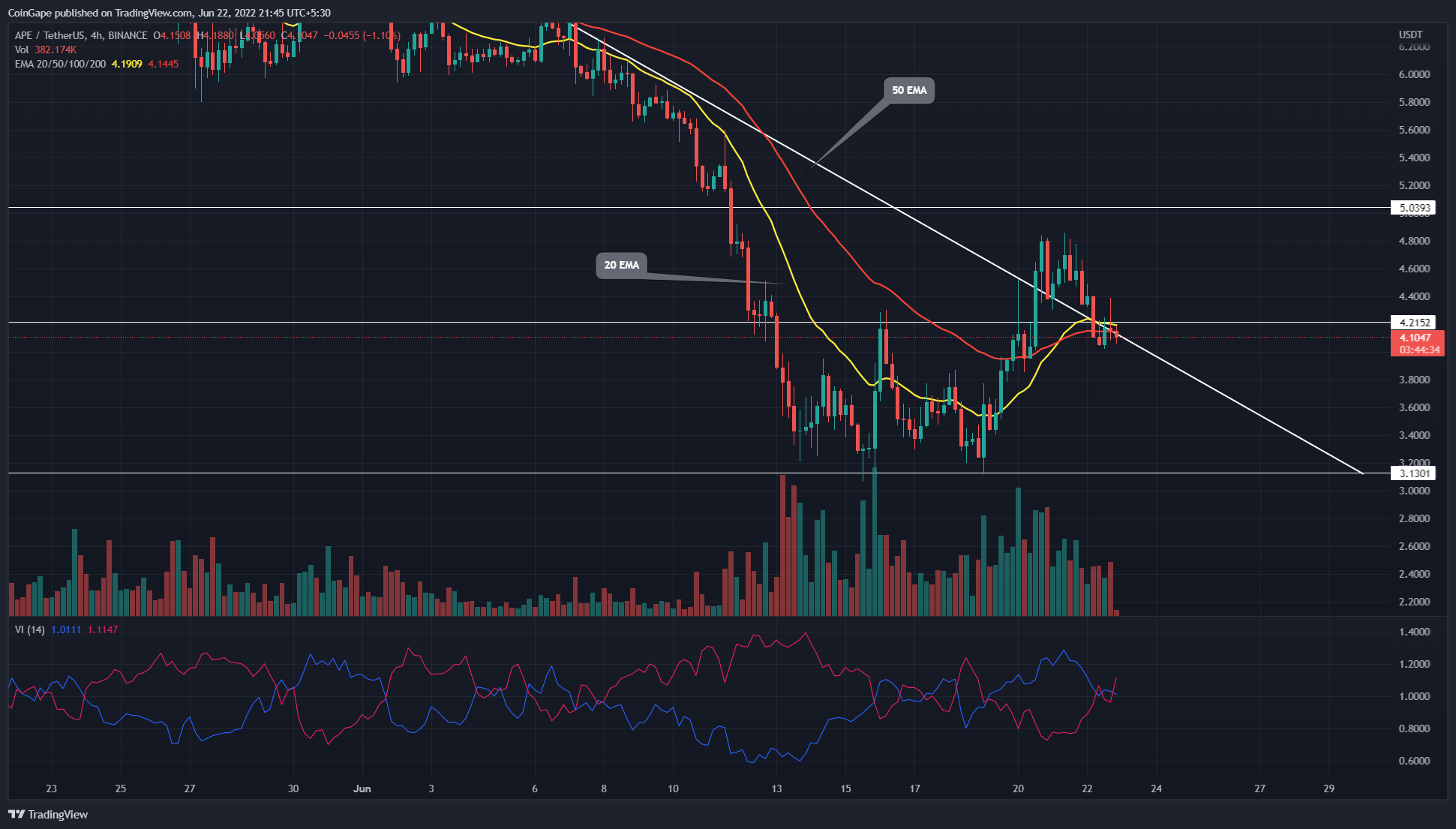 After a sharp drop from April to Mid-May, the APE/USDT pair decelerated on its downward spiral as it reached the $5.2 mark. The subsequent downfall reflected a steady decline, responding to a descending trendline.

In June’s second-week sell-off, the APE price breached the $5.2 support and depreciated 38.2%. As a result, the altcoin reached a new 2022 low of $3.13. Last week, the coin price showed multiple retests to the $3.2 mark, validating it as legitimate support.

During these support retests, the APE chart revealed a double bottom pattern in a 4-hour time frame chart. Thus, on June 20th, the coin price gave a decisive breakout from the confluence resistance of the descending trendline and the $4.32 pattern neckline.

However, the buyers couldn’t sustain this breakout and plunged the APE price below the breach trendline. Thus, if the selling pressure persists, the sellers may pull the altcoin back to $3.13 support.

EMAs: Along with the descending trendline, the recovery rally breached the 20-and-50-day EMAs resistance. However, the trendline fakeout undermines the bullish crossover among these EMAs.

Vortex indicator: a bearish crossover between the VI+ and VI- slopes encourages sellers to target the $3.13 support.

From the past 5 years I working in Journalism. I follow the Blockchain & Cryptocurrency from last 3 years. I have written on a variety of different topics including fashion, beauty, entertainment, and finance. raech out to me at brian (at) coingape.com

The presented content may include the personal opinion of the author and is subject to market condition. Do your market research before investing in cryptocurrencies. The author or the publication does not hold any responsibility for your personal financial loss.